11/06/2020
Oman 2020
I should have done this report a lot earlier considering all the time I have had on my hands, anyway better late than never.
Well this was a trip I was really looking forward too, Southern Oman with No Boundaries on their new live aboard Notus Temptress with the possibility of getting amongst some monster GT’s. As the trip came closer the coronavirus outbreak really started to kick off in various parts of the world and we were all fearful flights would be cancelled and that would be the end of our plans but with no notifications on the 11th March we headed down to Heathrow.
We flew with Oman Air to Muscat then another internal flight to Salalah in southern Oman, after collecting baggage and completing a medical form to allow us us in to the country the six of us then took a couple of taxis to the dock 35 minutes away. Arriving at the dock we were greeted by Jay the manager of the operation who welcomed us aboard Notus Temptress our home for the next 7 nights or so we thought! 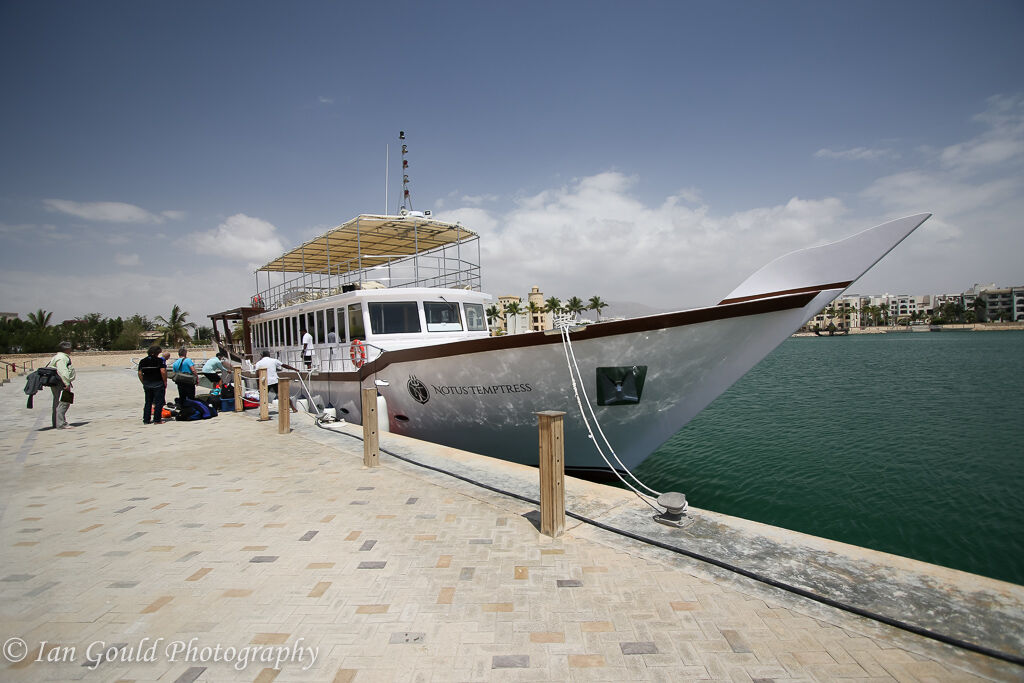 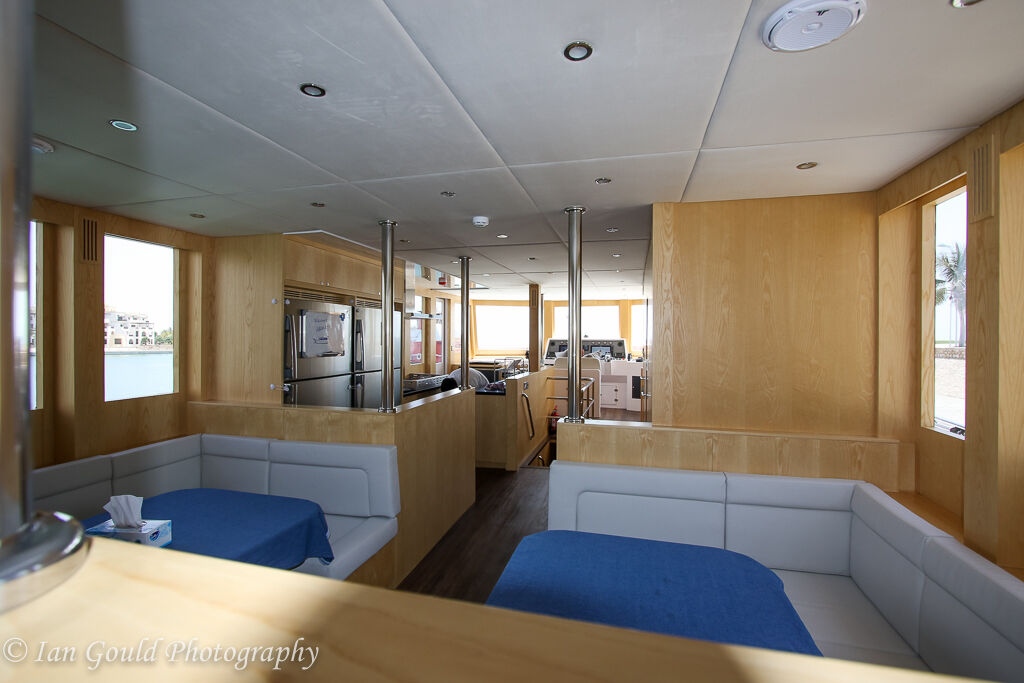 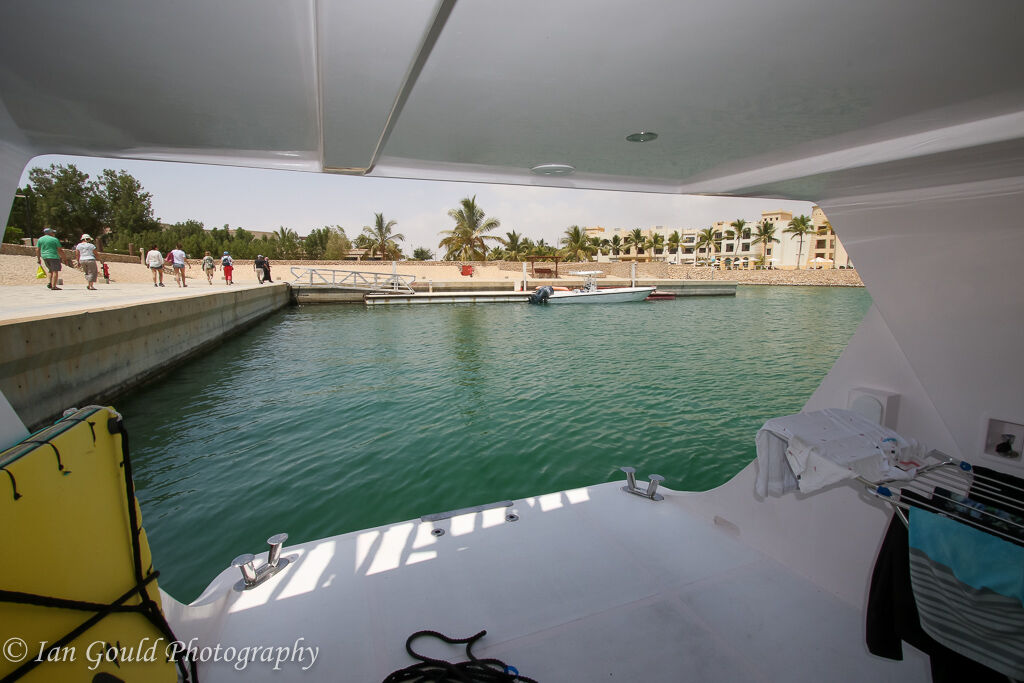 Notus Temptress is a superb comfortable live aboard, with 4 cabins sleeping 3 in each all air conditioned with en-suite an upper open deck which was a great place to relax after lunch before the afternoon session.
We left the dock just after lunch for the 11 hour journey to the Hallaniyat Islands, the trip gave us time to set up all the tackle ready for the early morning start the next day. 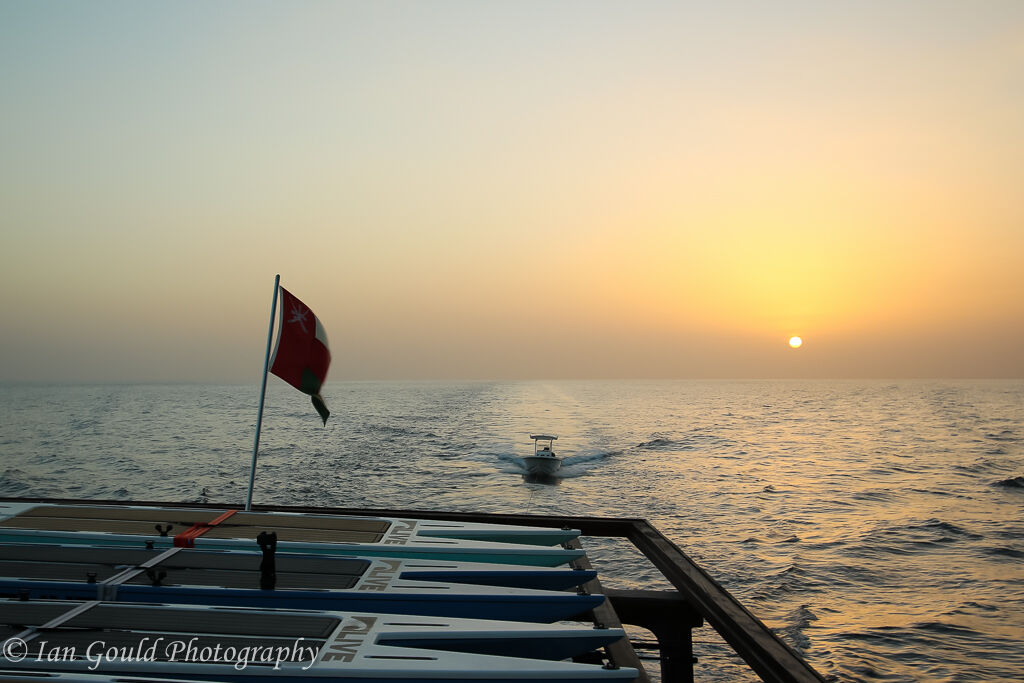 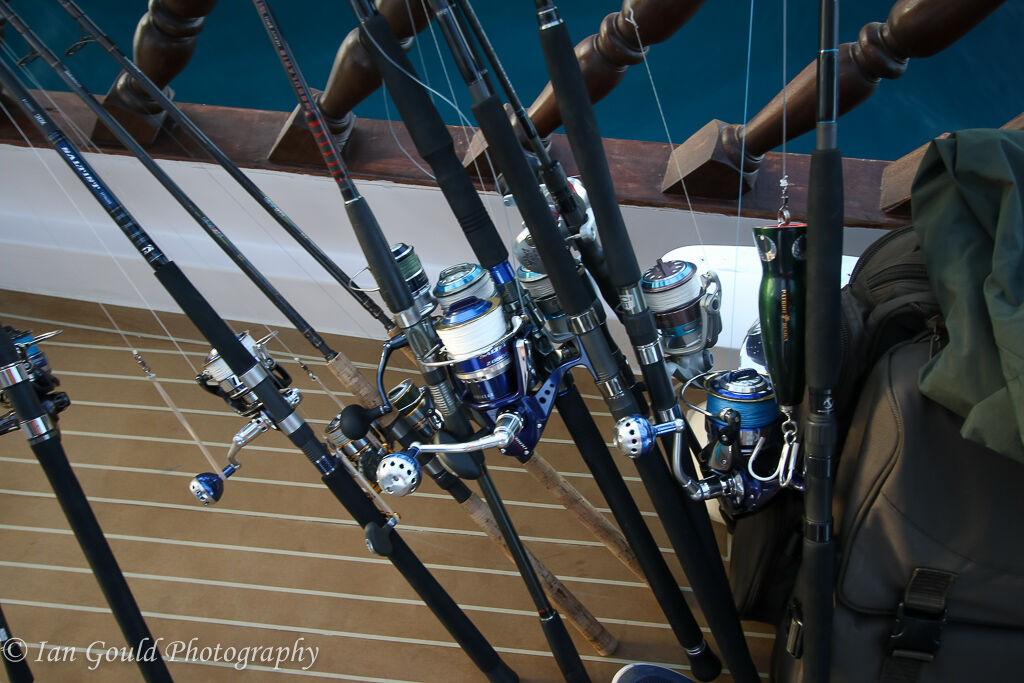 After a good nights sleep it was breakfast at 6am for the 9 of us, our party of 6 and a great bunch of South Africans Ian, Neil and Gareth who were a good laugh as well as very generous with their whiskey supply.
The fishing boats are 3 32foot centre consoles that can be boarded from the rear of the lower deck, so we headed out for our first days fishingin the Arabian sea full of hope and expectation. We had all taken popping outfits (PE10), stickbait outfits (PE8), Jigging outfits PE2-5) and light lure setup (PE3) with poppers & sinking/ floating stickbaits in the range 140gram to 190gram without hooks.
This type of fishing is not for everyone as casting big lures on a lumpy sea while trying to maintain your balance but if you are after GT’s you have to put in the work.
Jay had warned us the fishing had been tough for the last week so we knew we would have to work for our fish but hopefully things would improve as the week went on as trips like these one good session changes everything.
Well we thrashed the ocean for very little reward as the GT’s just did not want to play.

Day 1 A bonito, queenfish, yellowspot trevally, big eye trevally and the skipper of our boat had a GT around 28kg on a small casting jig on light tackle which gave him a very good work out but that was the action for all of us. 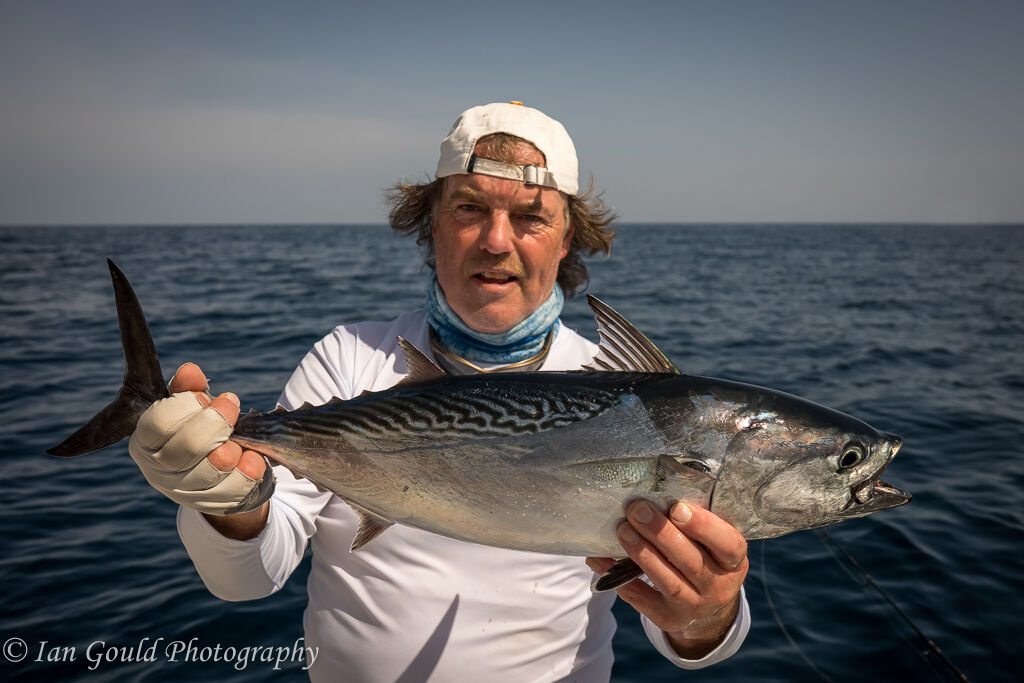 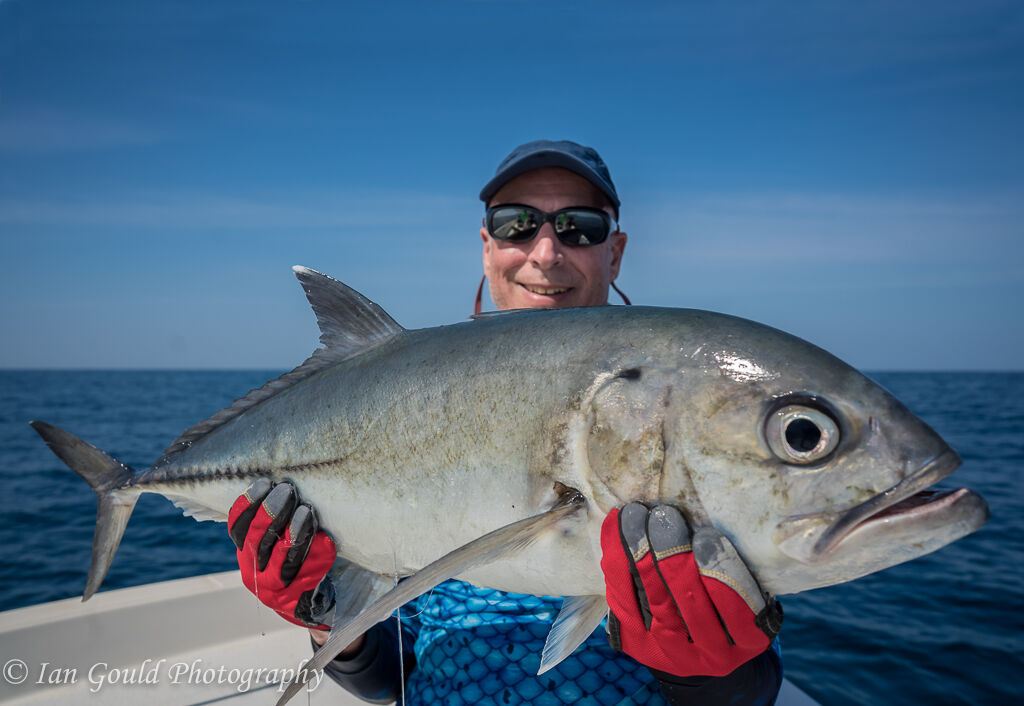 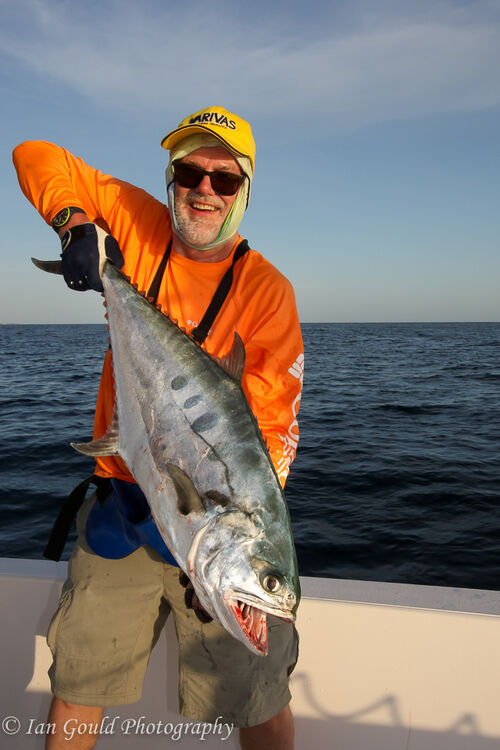 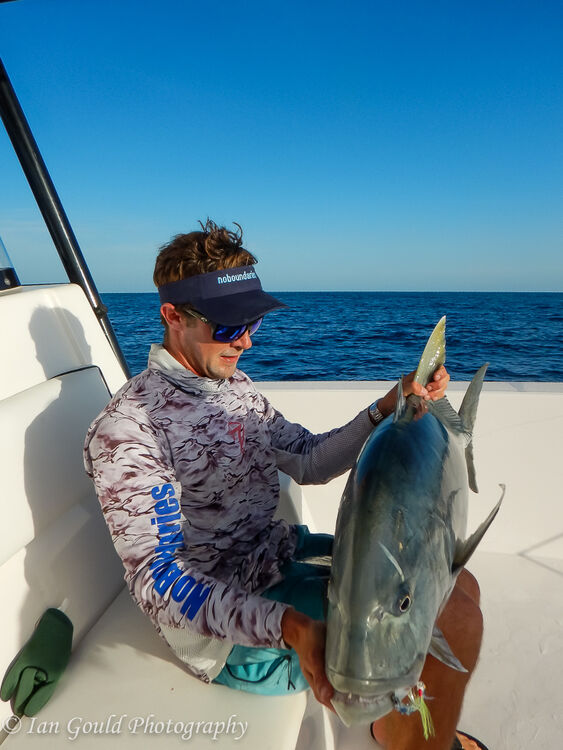 We had an uncomfortable nights sleep on the live aboard as jellyfish had blocked the filters for the generator which knocked out the power for the air conditioning so the temperature in the cabins rose to over 30 degrees but after a good breakfast we were all ready for the day ahead.
Day2 We tried a couple of marks without success so moved around one of the islands to where the South African lads where fishing just as one of them had hooked up big time, so we stayed to watch the action. It was an epic battle where all 3 of them took turns on the rod to play the GT which was eventually landed and took the scales down to 62kg a fish of a lifetime. 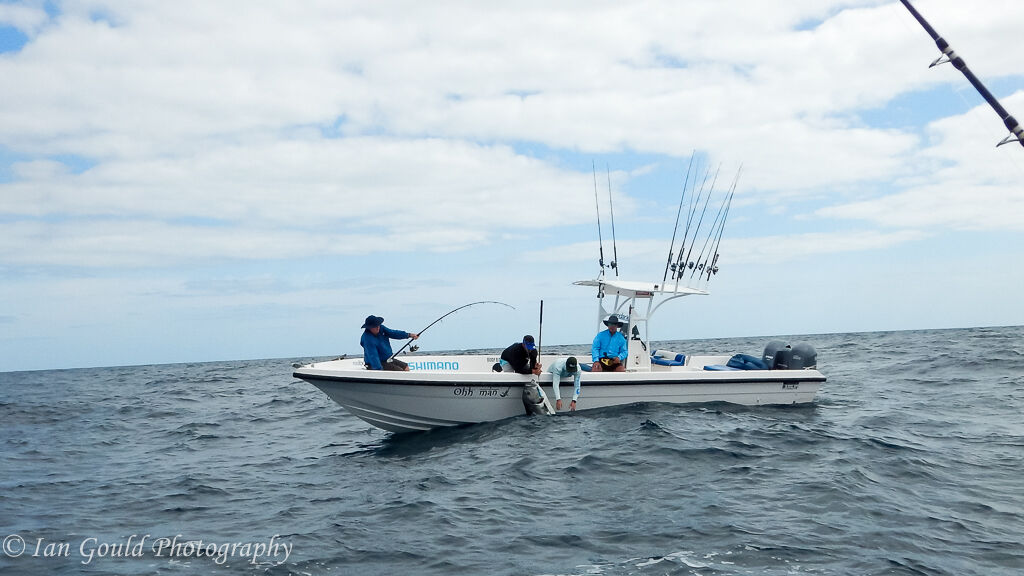 We fished around the area having a queenfish and tuna, the other lads had a small GT together with a tuna that being all the action for day 2. 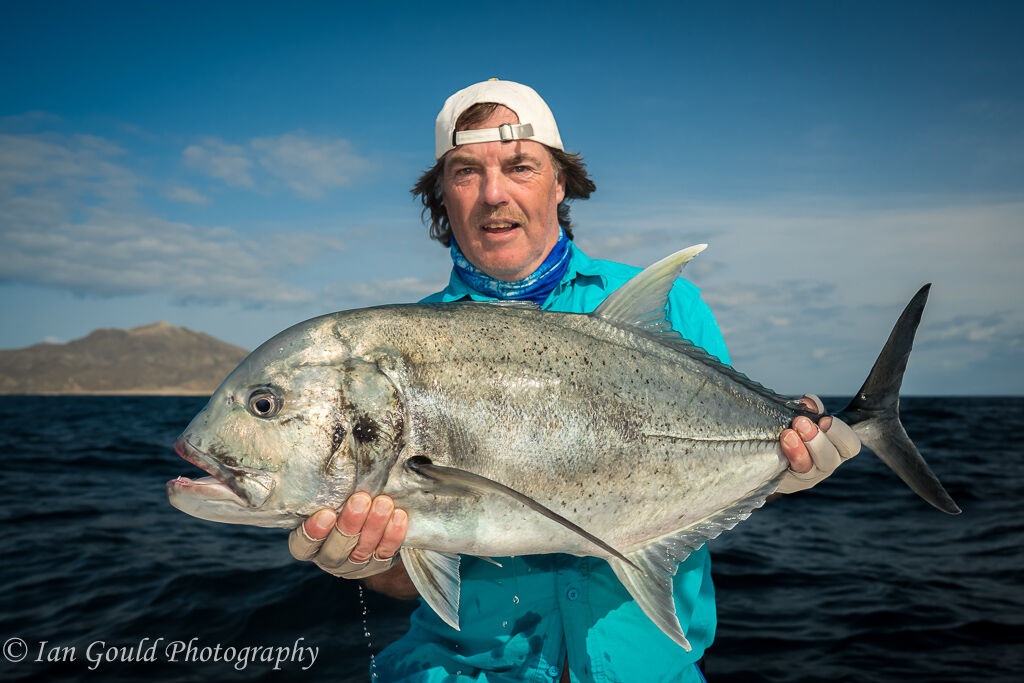 When we arrived back in the evening our mothership had moved to another location a nice bay hopefully away from the jellyfish, so after a quick shower and change we were ready for dinner but just as our steak and chips had been prepared a large swell lifted the boat sending everything crashing to the floor. Fair play to the lads as they quickly knocked up an alternative meal but I would have preferred my steak and chips.
Day 3 Started off with me cracking off on the cast with a new Orion Bigfoot 190 when the braid looped around the first eye, it just had to have been a favourite sinking stickbait! Again another tough day on the poppers and stickbaits, the lads on the other boat picked up a few fish on slow jigs.
Day 4 After a few hours early morning after the big stuff with only a nice queenfish for our efforts we came in closer for a bit of light lure fishing over a reef. 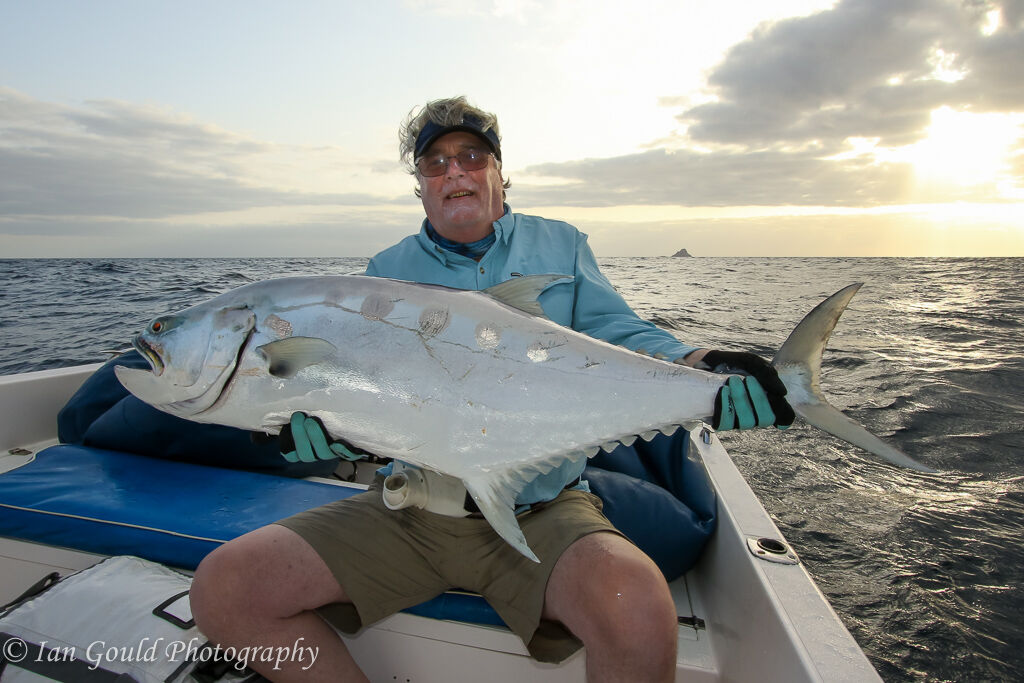 We had some nice action catching spangled emperor, triggerfish, rock cod, garfish and another weird fragile fish that is similar to a garfish but I can’t remember its name. 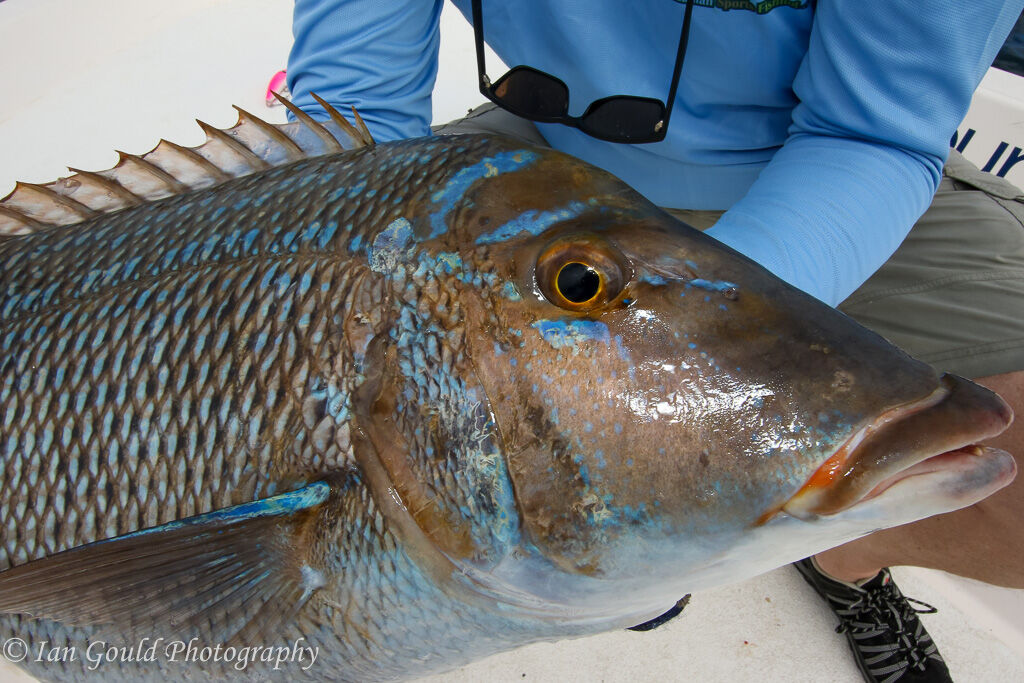 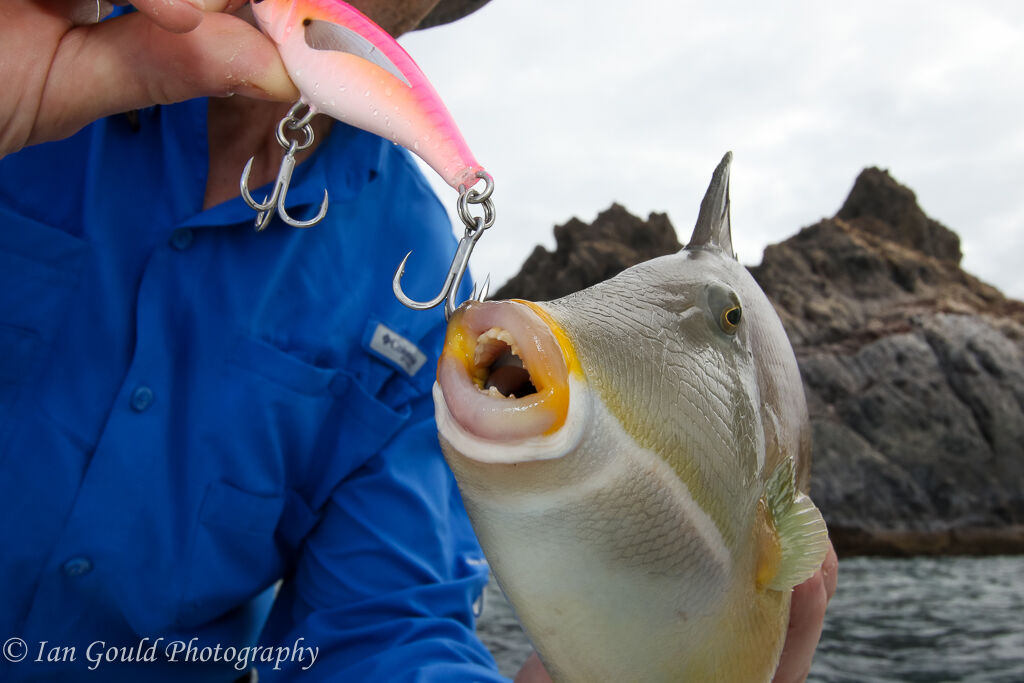 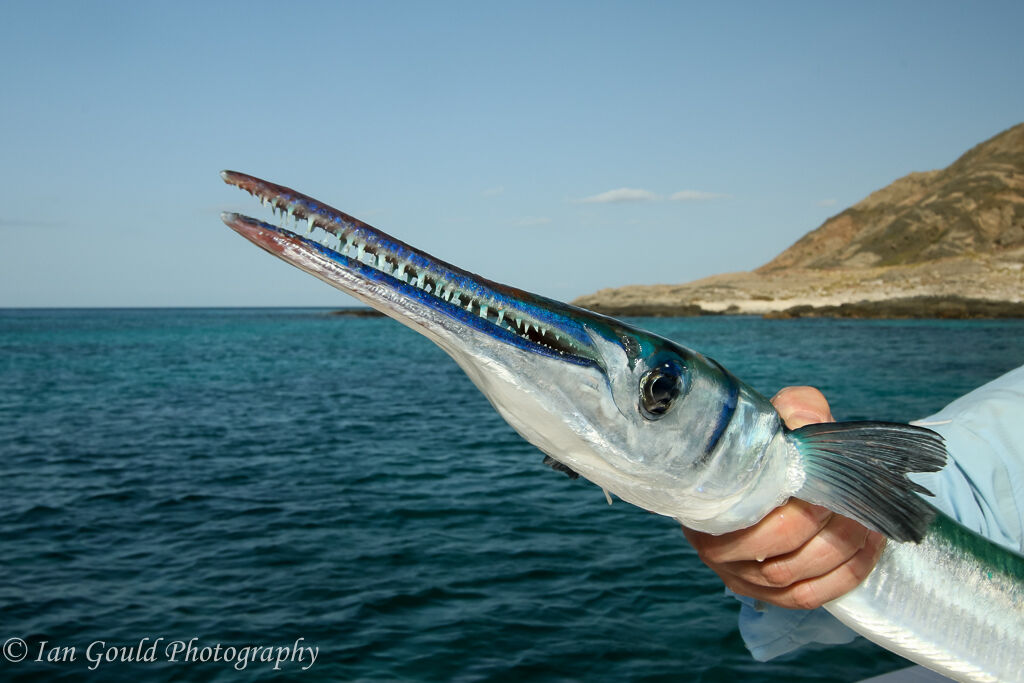 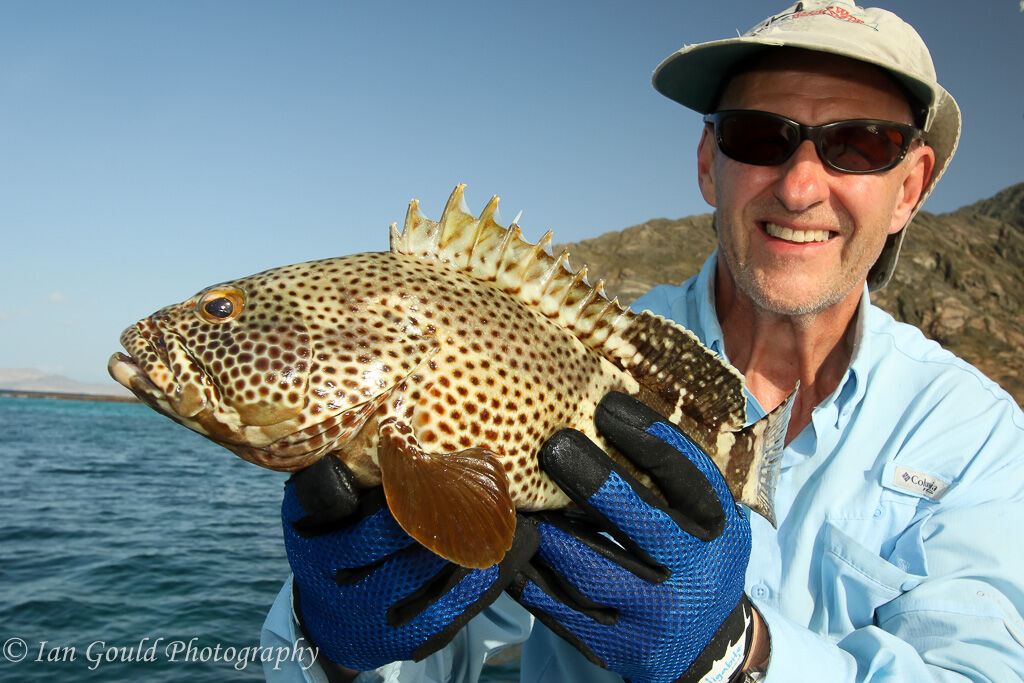 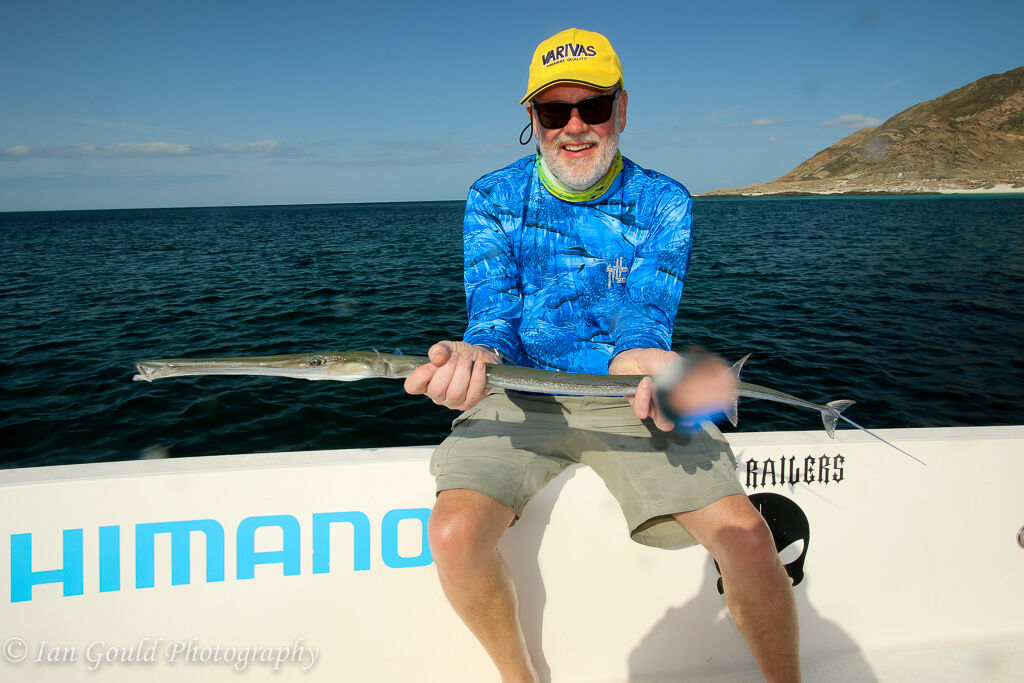 While I was casting a Blaze Burn 20gram stickbait fusilier pattern it was hit by a good GT, the Saragosa 5000 screamed out and the Daiwa Saltist travel rod 28-84g took on a full fighting curve. I battled as hard as the tackle would allow for a good 5 minutes but was totally out gunned and eventually it reefed me despite chasing all over the reef after it but it was good fun while it lasted.
Our mates on the other boat had a great day with queenfish, yellowspot trevally and tuna with triple and double hook-ups for several hours 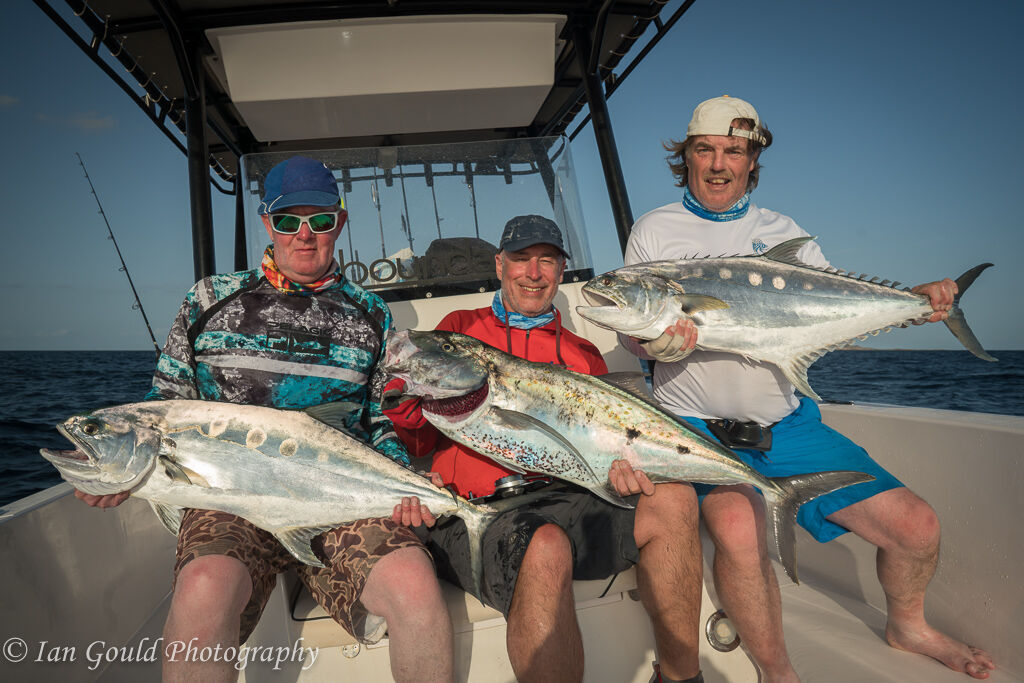 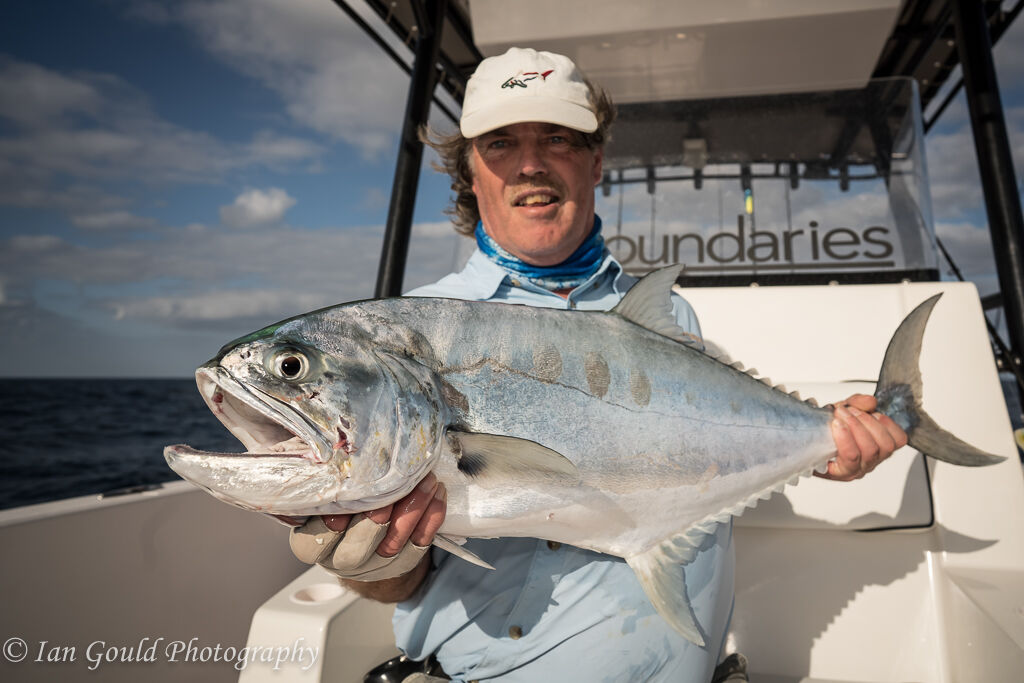 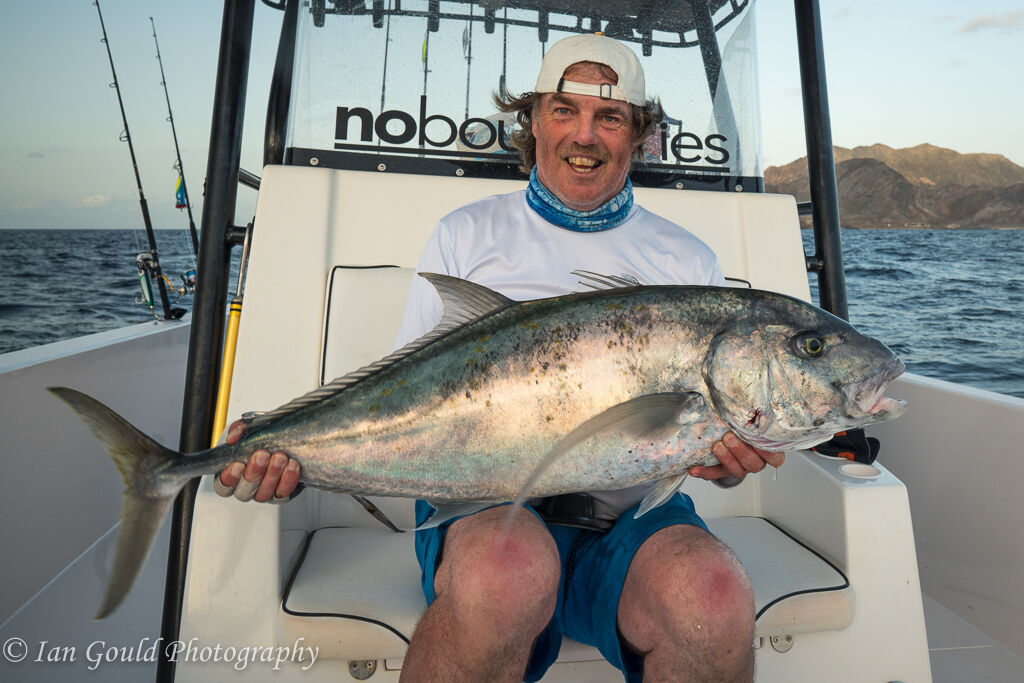 When we returned back to Notus Temptress that evening we all felt things were definitely on the change and we were all looking forward to the next couple of days with a lot more expectation.
I was in the shower when my mate shouted me to say Jay had called an emergency meeting on the top deck, we all headed up there with no idea what the emergency could be. We were informed our trip was cancelled due to the concerns of the coronavirus impact and the following morning we would be heading back to the dock to make our way home.
So that was the end of our Oman adventure, we lost 2 days fishing on the live aboard and 3 days shore fishing we had booked at the No Boundaries lodge to finish off our trip. We also lost out just over $2000 on the trip with No Boundaries telling us to claim on our travel insurance policies but with insurance companies only paying on curtailment of trips for death of a close family member, illness or burglary we all ended up with nothing. Oman Air were very helpful and swapped our tickets for a minimum cost allowing us to fly out the same evening so on the 18th March we arrived back in the UK. 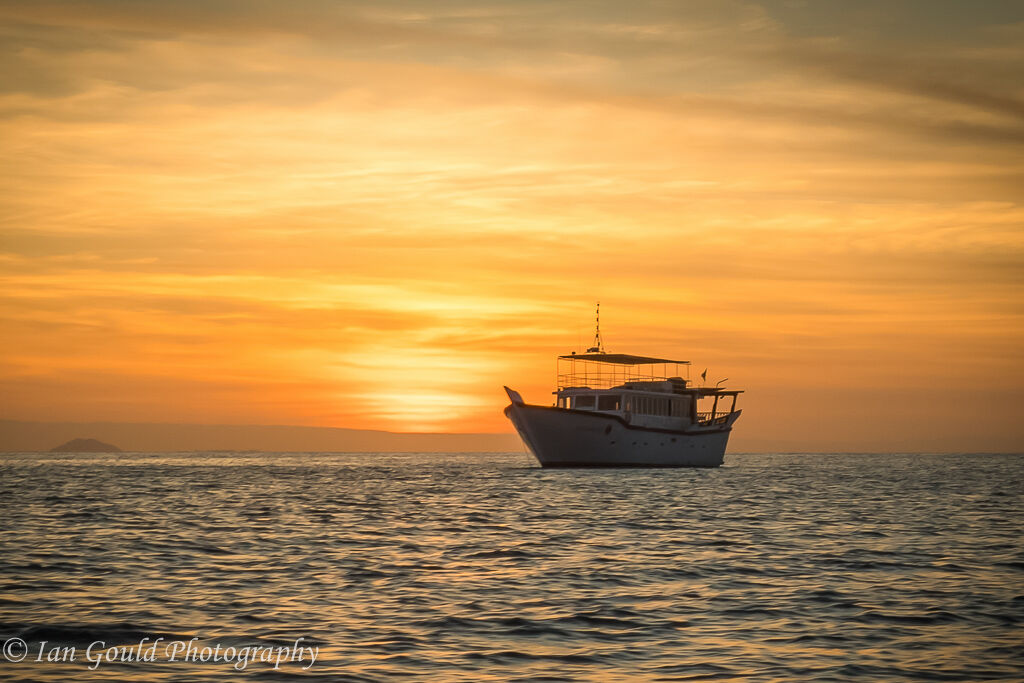